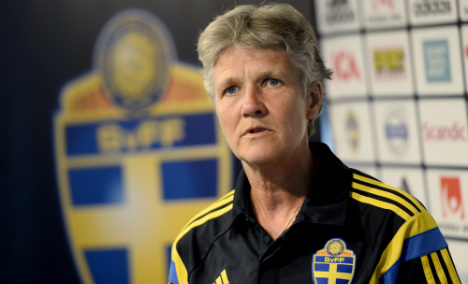 "Traditional gender roles are in many areas deeply entrenched," Sofia B. Karlsson, who is involved in the Football for All project, told The Local.

Football for All (Fotboll för Alla) is a cooperation between Stockholm professional club AIK and Amphi Produktion and aims to develop training materials and methods to tackle racism, homophobia and sexism within the game at all levels.

"We want to develop tools so that everyone can be themselves on the football pitch, it is only then that we feel and can perform at our best," she said, explaining that the project targets coaches for teams with players aged 7-19-years-old.

The Local reported on Wednesday that two 11-year-old girls playing for one of the winning teams at a beach football tournament in Åhus, southern Sweden, were harassed by the home team after accusations of being boys in disguise.

The ensuing controversy has received a great deal of exposure in the Swedish media and national team coach Pia Sundhage was moved to send the girls, who play for a team in Lund in southern Sweden, a message of support and has described the incident as "abominable".

Sundhage, who won two Olympic gold medals while coach of the US national team, has previously spoken about how she adopted a male alias in order to pursue her career in the 1960s and in interview with the Aftonbladet daily on Thursday she was disgusted that girl football players were still judged on their appearance.

"It is a sign that we have placed girls in a box and that there are expectations for what they are able and allowed to do," she said.

Sundhage's assessment was shared by Jesper Fundberg a researcher at Malmö University who studies gender, ethnicity and sport.

"We see the boy body as better, the real football body, and then it is seen as a form of cheating," he told the local Sydsvenskan daily.

Meanwhile Åhus IF, the club which hosted the tournament, has announced that the club board is reviewing the position of its youth coaches who have been accused of instigating the controversy.