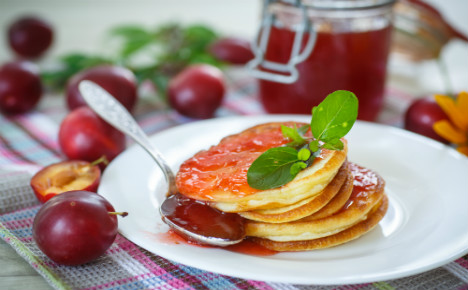 The jam was described as the type you would use on pancakes: Shutterstock

The sticky situation occurred on the E45 outside Sunne around midday on Tuesday. A police spokesperson said the delivery van had got into difficulty and started to shed all manner of different items.

"There was a lot of jam and juices which went down the drain," Tommy Lindh, spokesperson for the Värmland police told the TT news agency.

According to local newspaper NWT the drama unfolded when the door of the delivery van opened and a pallet, loaded with breakfast favourites, was chucked out onto the road.

Predictably, it led to a traffic jam with a section of the road being sealed off so a clean-up operation of broken glass and sticky substances could be attended to.

Emergency services were dispatched and firefighters quickly spread themselves over the scene to ensure that traffic backlog could be unstuck.

When asked to describe the incident a local firefighter declined to keep a lid on the matter and didn't announce any plans for preserving the scene. He did however describe what type of jam that had stuck to the road.

"It's a mixed compote, common pancake jam. We have a stretch of 70 – 100 metres that is just full of jam," Fredrik Persson, a fireman with the Sunne emergency services, told TT.

Nobody was hurt in the incident with drivers urged to take an alternative route while the clean-up continued. Traffic got back underway at 2pm.