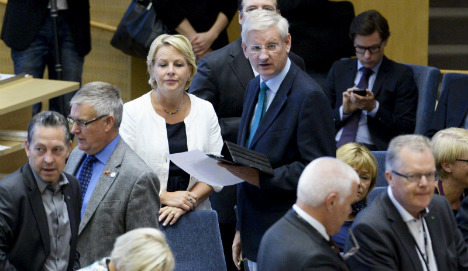 Sweden's Minister of International Development Cooperation Hillevi Engström with Foreign Minister Carl Bildt. File photo: TT
The Swedish funds come from existing aid budgets but have been re-allocated to focus specifically on the issue.
"The situation of girls and women is a highly prioritized area within Swedish development aid. Female genital mutilation (FGM) must be eradicated within a generation," Sweden's development aid minister Hillevi Engström said via Twitter.
Engström explained that Sweden is focusing more funds on the issue in the face of renewed threats against women's rights.
The funds will be forwarded to a project which has been running since 2008 and is managed by the United Nations Children's Fund, UNICEF and Population Fund, UNFPA. According to Engström the project has managed to persuade thousands of local councils in African countries to outlaw the practice.
Engström is currently in London attending the Girl Summit which aims to increase support to achieve faster and greater gains in the fight against FGM and child marriage.
The minister expressed a hope that Sweden's financial commitment is copied by other states.
"Around 600 participants from the whole world at Girl Summit, I hope that many more than Sweden announce increased support," she said.
The phenomenon is most widespread in countries across the Sahel in west Africa to the horn in the east. In Somalia, Egypt, Mauritania, Ethiopia and many smaller countries in the west, more than 80 percent of women are genitally mutilated. The procedure is typically carried out at a very young age and carries serious risks of infection and death.
While the UNICEF/UNFPA project is focused on tackling the problem at its source, the problem is gaining increasing attention in Sweden.
The Local reported in June that  all 30 girls in one school class were found to have undergone the procedure.
Increasing immigration into Sweden has made the problem more common and the government has previously announced initiatives halt its development with an online training programme for school and healthcare staff.