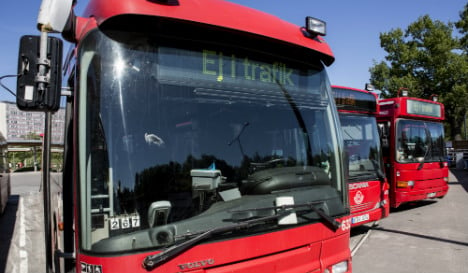 Some of Stockholm's buses only have air conditioning for drivers. Many lack air conditioning entirely – leaving drivers and passengers alike gasping for air as temperatures soar to 32.5C onboard, according to a report in the Dagens Nyheter (DN) daily.

More than half of central Stockholm's 300 buses will be replaced in the middle of August, and the new vehicles must have functioning air conditioning both by the driver's seat and for the passengers.

But until then, the local traffic authority, SL, has now recommended that Stockholmers avoid travelling by bus as much as possible during rush hour.

"When it gets so incredibly hot, it's hard to regulate it," assistant department manager Fredrik Cavalli-Björkman, at SL, told DN. "And now that SMHI has issued a heat warning, you have to plan your trip a bit more."

The newer SL blue buses are equipped with air conditioning, but frequently have faulty systems. The onboard temperature system was tested and installed during the spring, and have experienced malfunctions during the unexpected summer heat.

Even on the buses with functioning air conditioners, frequent stops in central Stockholm mean bus doors swing open every couple of minutes, leaking out valuable cool air and hiking temperatures faster than they can cool.

The Work Environment Authority (Arbetsmiljöverket) stipulates that office temperatures for work where employees sit still should be between 20 and 24C. However, there are no such recommendations for work on commuter traffic, and in practice there is no limit on how much heat drivers can take. The only rule is that the bus must be warmer than 5C when the bus driver begins work.

However, SMHI added that the heat warning is unlikely to continue past the weekend, with temperatures suspected to drop on Sunday to a more comfortable zone between 22 and 27C.