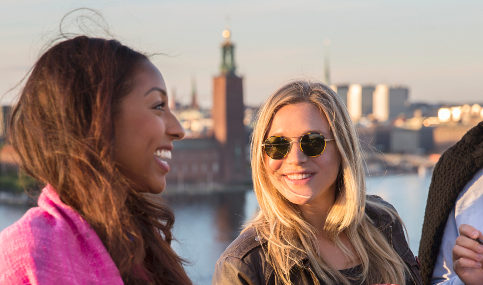 A recent survey of 5,000 singles in the Nordic nations presented Sweden with a beauty crown. Swedes came overwhelmingly in first place for their looks, with 70 percent of Norwegian women saying their Swedish counterparts were the most beautiful women of the north, and similar numbers from other genders and nationalities.

The Local decided to test the results by asking random Swedes on the streets of Stockholm what they thought.

Nations were not allowed to vote for themselves – but Emma Wiberg agreed with the results. "There are attractive people in all of the countries, just more in Sweden."

Linnéa Andersson told The Local that Swedes were indeed the most beautiful, but said it was more because of their clothes more than anything else.

"I would say Swedes because we are really fashionable and open for new trends," she said. "Also, we are really rocking the Viking heritage."


A Stockholmer tells The Local which Nordic nation is most attractive. Photo: The Local

Finland came last in the survey, but The Local found that Finns have a friend or two in Sweden. Filippa Malmqvist said that the most attractive people of the Nordics aren't uniformly from one nationality – they're a blend.

"Finnish power and Swedish beauty make the best combination. It's the best of two nations."

Johan Snider, an American now living in Sweden, had even more specific tastes:

IN PICTURES: People-watching in Stockholm, July 23 Still, Swedes in the survey voted mostly for Norwegians, and The Local's street sample confirmed the Swedes like their nearest neighbours.

"From my experience, the people in Norway are the most attractive people in all of the Nordic countries," said Aksel Wannström.

He added that they are so attractive because they stay active.

"They have the same general aesthetic appeal as most Danish, and Swedish citizens but here they're religious walkers. It keeps them all in excellent health and vigour."

Rodrigo Muñoz had mixed feelings, saying that Finns were the most passionate lovers, but agreeing that in general the Norwegians win – "Because they are as attractive as Swedes, but make love like Finns. Plus they have money."