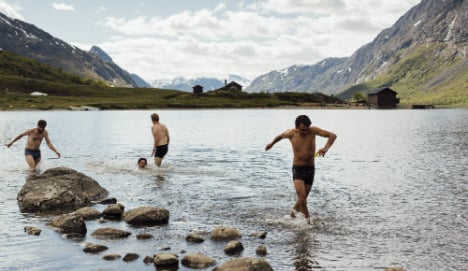 Photo: TT
"We began to issue warnings last year, but then temperatures never reached up to these levels," said Lovisa Andersson at Swedish Meteorological and Hydrological Institute (SMHI).
"For a Class 1 warning it is required that the maximum daytime temperatures go up at 30C or more, three days in a row," she explained.
A class 1 warning means that weather conditions carries certain risks to the public and disruption for some societal functions.
The heat warning applies to the northern areas of the country, in Västernorrland, Västerbotten and Norrbotten. All these areas have been experiencing temperatures well above those experienced in other areas of the country for the past week.
See also: Northern Sweden warmest in 90 years
Nights have also been unusually warm, with temperatures not falling below 20C in several parts of northern Sweden, leading to Swedish media describing them as "tropical".
The heat wave will however not be reserved to the north with the rest of Sweden also set to enjoy a scorching week.
IN PICTURES: Sweden's Top 10 beach hotspots
"It will remain warm with temperatures of 25-30C, with the greatest chance for high temperatures in northern Sweden," said Lovisa Andersson.
The Local reported on Monday that several popular beaches were warning against jumping in for a cooling dip as high levels of bacteria had been detected.
See also: Swedes soak up sun as beaches ban bathing
Despite the highs expected, Sweden still has some way to go before records are broken.
The record temperature for 2014 so far was set in Junsele, northern Sweden, on July 9th when the mercury hit 31.8C. Sweden's all time record temperature was recorded in 1933 in Ultuna and Målilla – a staggering 38C.
Wondering what the weather looks like in your corner of Sweden? Check out The Local's weather page here.