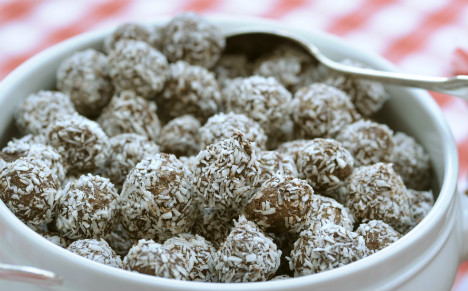 Business woman and Moderate party politician Eva Sidekrans sparked controversy by selling the items with the label which was widely picked up by social media.

"We have this morning lodged a police notification against her for a hate crime against an ethnic group," Zakaria Zouhir, chairperson of the Afro-Swedish national association told the TT news agency.

Zouhir added that there is, at present, no discrimination law covering the labelling of items and suggested that it should be changed.

"For it is racist and offensive," he said.

The politician has since issued an apology telling TT; "If anybody feels offended by my pastry then I am sorry. It has never in the ten years that I have sold them had the purpose of upsetting anybody."

Sidekrans runs a business called Seama which bills itself as "old fashioned goodness" on her website. When quizzed why she had called the items 'negerbollar" she referred people to visit a well-known dictionary website.

"Visit tyda.se and search for the word negerboll. That's where you will get the explanation," Sidekrans told the Arbetarbladet newspaper.

On the site it says that according to the Swedish national food administration (Livsmedelsverket) you can't call a 'negerboll' a coco ball or a chocolate ball as they both contain the same small quantity of coco and chocolate.

However, the website also states that the Equality Ombudsman (diskrimineringsombudsmannen) warns against using the term.

"Those who say that it doesn't mean any harm just don't understand," added Zouhir.

Sidekrans was due to stand for election in Älvkarleby, central Sweden, in September but her fate now hangs in the balance.

"It is inappropriate to use that word and we will have a meeting of the union leadership and have a conversation with her, but I can't currently say whether she will remain on the ballot," Jessika Vilhelmsson, chairperson of the Moderates in Uppsala told TT.

"It's not the first time their politicians behave in this way," said Zouhir in reference to the incident two years ago.

"There seems to be a culture among the Moderates that you behave racist," he said.

Lawyer Per Holfve told TT that the term 'negerboll' is considered offensive by most people but that labels are not presently covered by discrimination law.

Sweden's Discrimination Ombudsman classified the word 'negerboll' as inappropriate in a 2005 ruling against a bakery in Sjöbo in southern Sweden, arguing the term was redolent of racism and slavery.