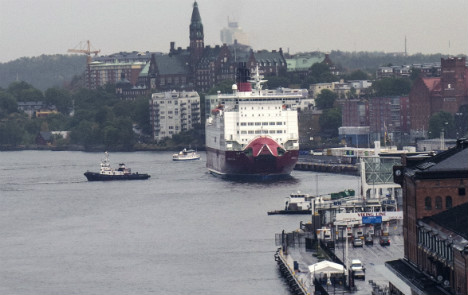 The Viking Lines ferry pictured was ripped away from the dock as a result of the storm. Per Gustavsson / TT
After a scorching Saturday, where the mercury reached almost 34C, the sunny climes were replaced with strong winds and heavy rain in the capital.
The storm hit just after lunchtime, andresulted in some major damage to power lines and caused disruption to public transport.
A Viking Lines ship docked in Stockholm tore free from the dock due to the winds. No one was injured as most passengers were ashore at the time.
There were also several reports of lightning and flash flooding, with the scene described as "chaotic" by emergency services as wind speeds reached 20 metres per second. Several shops in downtown Stockholm, including shopping center NK, had to close due to flooding.
A spokesperson for the Stockholm fire service said there had been hundreds of alarms following the storm.
"We've had to prioritize personal injuries and fires but fortunately there haven't been any serious incidents," Jarmo Carlsten of the Stockholm fire service told Sveriges Television.

The Swedish weather agency had previously issued a class one warning for impending severe thunderstorms for the Västra Götaland and Halland regions in western Sweden as well as Kronoberg and Jönköping in the south.
On Saturday a temperature of 33.9C was recorded in Hökmarksberget, northern Sweden on Saturday with weather experts saying that is likely to be the peak of the sweltering sun.
"Until Monday and Tuesday we'll see that relatively warm air covers large parts of the country. But then there will come a period of lighter form of rain and thunderstorms, which can be quite severe, which means the temperatures won't rise so high during the daytime," Lovisa Andersson of Swedish Meteorological and Hydrological Institute (SMHI) told the TT news agency.
A class two warning is still in place for eastern Svealand and along the coast of Norrland, where temperatures may still reach 30C.
On Saturday there were several cases of flooding in Västra Götaland on Sweden's west coast. The Allsvenskan match between Gais and IFK Värnamo in Gothenburg had to be temporarily halted due to torrential rain. By contrast in Malmö, southern Sweden, the game between the home side and Kalmar was briefly halted so the players (above) could have a water break as temperatures reached 32C.
The storm which caused chaos in the capital is now expected to go northwards.
Check out the weather for your corner of Sweden
TT/The Local/pr