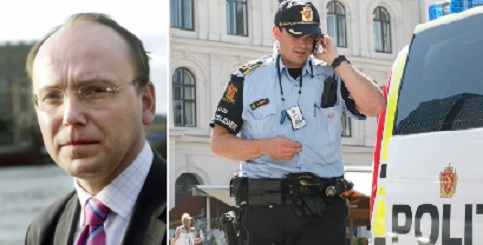 Terrorism expert Ranstorp and a policeman in Norway. Photos: TT

Sweden has started scratching its head about Norway’s methods of handling a recent threat.

Norway has been on high-powered, ultra-defensive tip-toe for the past few days, since its intelligence service (PST) said last Thursday that it suspected an “imminent” terror attack.

“Was it necessary? There are some critical questions we don’t know the answer to,” Ranstorp mused. “How close was the threat, was it an inevitable trajectory, and how much of it could they control? And we don’t know any of that because the story keeps on changing.”

Ranstorp said that both Sweden and Denmark have gone public about terror threats before, but generally only the threat is under control and the suspect has been clearly identified.

“That’s apparently not the case here.”

The threat was described as “credible” but “unspecific”, but the PST admitted that it did not know who was behind the threat, nor where or how any attack might be carried out.

Since then airspace has been blocked, football tournaments disrupted, and museums closed in preparation for the attack. Nuclear plants were shut down and border control checks increased.

Ranstorp said that the PST deserved praise for its openness – but not its timing.

“In order to maintain faith and credibility, they need to be as transparent as possible,” Ranstorp said. “But it should be done restrictively, and not without good grounds. The Golden Rule is that the more they go public, the less they know.”

Following the initial report on Thursday, Norwegian TV reported on Saturday that there was good cause to suspect the attack would take place on Monday. On Sunday agencies backed off, saying that indeed it may not be Monday – but that they still suspect an attack. The situation was unchanged on Monday.

“The 22nd of July was a sort of complete intelligence failure, and they took the safe road. It’s understandable,” Ranstorp told The Local.

“But we can be a bit critical of their level of response. There didn’t seem to be any clarity. One day they raised the level, the next they say it’s coming, the next they drop it again.”

Ranstorp said the nation could not continue indefinitely with such measures, as the drama has already hit hard on the Norwegian economy through lost tourism profits and overwhelming security costs – not to mention the potential impact on society.

“One of the big problems when you go out strong like this is that you not only create public anxiety, but it can also create terrorism in society,” Ranstorp told The Local.

“You have to make sure that if there is a general sort of threat like this that people stand together, with community leaders, to mitigate the long term effect.”

Ranstorp  disagreed – but did say an assessment would be needed to determine whether such measures had been appropriate.

“There needs to be an assessment, or Norway will be like a yo-yo with security, going up and down, up and down, and over time it will become meaningless. So you really have to reserve this extreme level of security for very severe situations.”

On Monday evening the PST announced that they would be lowering the threat level on Tuesday another step – but that the nation is still armed and prepared for an attack.