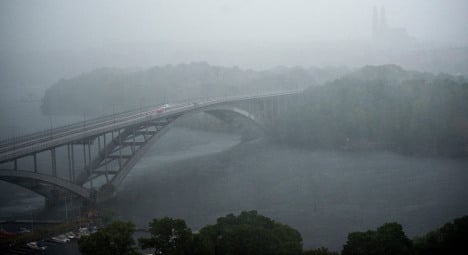 Photo: TT
If you thought Sunday's thunderstorm was bad, then you'd better take cover on Monday.
Meteorologists said Swedes can expect similar weather to that of Sunday, when around 45,000 lightning bolts hit Sweden – the most recorded in a single day all year.
Stockholm was particularly heavily hit by the summer storm, with tube stations flooding, a cruise ship tearing free from the dock, and high-speed winds scattering tree branches and litter throughout the streets.
Check out the weather for your corner of Sweden
Weather agency SMHI said on Monday that eastern Sweden would be the hardest hit by the second round of storms, and issued a class one warning for Västerbotten and Norrbotten.
"That's where the thunder will be the strongest, but there will likely also be thunderstorms elsewhere across the country," Lovisa Andersson, meteorologist at SMHI, told the TT news agency.
But it's not all wet weather. In southern Sweden, there are risks of forest fires in Skåne, Östergötland and even Gotland due to especially dry grounds.