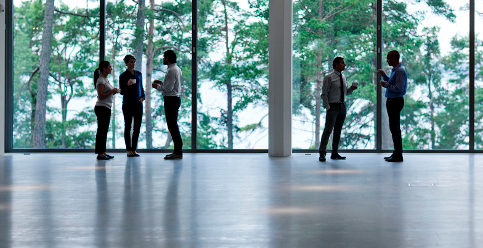 Photo: Henrik Trygg/Imagebank Sweden
With an employment rate for non-EU citizens of just 50.2 percent, Sweden ranks among the very worst in the EU.
Indeed, only Belgium at 39.9 percent, Greece at 49.7 percent, Spain at 50 percent, and France at 48.6 percent were worse.
But compared with Sweden's soaring employment rate for nationals of 81.3 percent – the highest in the EU – the gap between employed nationals and non-EU nationals is larger in Sweden than anywhere else in the EU.
The difference, -31.1 percentage points, was greater than that in Belgium at -28.8, the Netherlands at -26.8, and France at -22.0.
Susanne Spector, a labour economist at the Confederation of Swedish Enterprise (Svenskt Näringsliv), said the structure of Sweden's labour market was to blame.
"There are probably many factors at play, but the biggest one is the fact that the Swedish labour market is not flexible enough to absorb so many newly arrived immigrants," she told The Local.
"And it is the newly arrived immigrants who are most often the ones who are unemployed. If you compare the statistics of people who have been here for ten years you'll see a difference."
Indeed, figures from Eurostat last month showed that Sweden, which has just 1.9 percent of the European Union's total population, took in 19.5 percent of the EU's 135,700 asylum seekers in 2013. That's over 26,000 for Sweden alone in 2013 – more than any other country in the EU.
"On top of that, Sweden had the lowest wage dispersion of all EU countries in 2010 and this, of course, makes the Swedish labour market less flexible than the labor market in other countries," Spector said.
She added that the Swedish language was "of course another explanation" for Sweden's jobless foreigners, but was quick to add that most other countries in the EU would also pose language difficulties for new arrivals.
Meanwhile, 61 percent of Sweden's foreign population was employed in 2013, Eurostat noted, with EU citizens (at 75.5 percent employed) faring better than the non-EU citizens by over 25 percentage points.
Click image to view larger in pop-up window. Elsewhere in the EU, the unemployment rate across all 28 countries for non-EU citizens (21.3 percent for those aged 20-64) was more than twice that recorded for citizens of the reported country (10 percent).
Just over 56 percent of non-EU citizens, meanwhile, were employed across the continent, compared to 68.9 percent of nationals.
The statistics were published by Eurostat, the statistical office of the European Union, on Wednesday.