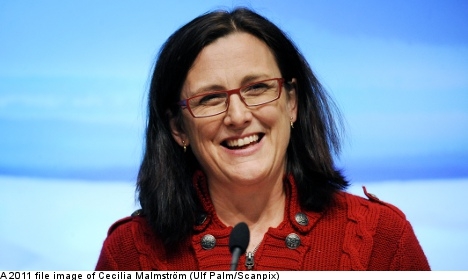 The five-year term will mark the second for Malmström, who was once referred to by Prime Minister Fredrik Reinfeldt as a "convinced Europhile".

Reinfeldt said on Thursday morning that it was "a pleasure to be able to nominate Cecilia".

Malmström, a member of Sweden's Liberal Party (Folkpartiet), tweeted that she was "happy and honoured" to be offered the post again.

Details about the  post remain unclear, but an EU summit at the end of August will reveal exactly what her position will entail.

Before entering politics, Malmström worked in France, Germany, and Spain for Swedish ball bearings giant SKF, experiencing first-hand the kind of "free movement" associated with European Union citizenship, and which she now helps shape and protect in her current role at the Commission.

According to Malmström, who lives with her husband and their twins in Brussels, her interest in European politics was awakened at an early age by a visit to the cemeteries near the beaches of Normandy where thousands of soldiers had perished during World War II.

Learn more about Malmström, a past Swede of the Week on The Local