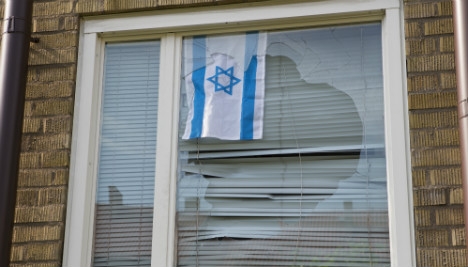 The aftermath of the attack in Seved, Malmö on July 6th 2014. Drago Prvulovic / TT

In early July the 38-year-old man in Seved, Malmö, was severely assaulted when he ran out into the street after his window was smashed.

Police initially classified the case as a hate crime, as the man had been hanging an Israeli flag in his window.

The man said the flag had been there for over a year, and suspected that the true issue behind the smashed window was his social media activism against the Iranian regime.

After hearing additional witnesses, the police have a new interpretation of events. Malmö police now have no reason to suspect that the severe beating was related to the flag.

"It was quite a while after the first stone was thrown that the man went outside to look for the people who had smashed the window," Thomas Bull, policeman in Malmö, told newspaper Sydsvenskan.

A witness reported that the man was "noticeably upset" and armed with a knife when he went out into the street. A few hundred metres from his apartment he confronted a gang of between five and ten people, who proceeded to beat him with an iron pipe.

However, police said there is no evidence that the gang included the person who had smashed the window, and the two incidents are not necessarily connected. Bull said that witnesses agree the assault was carried out by a group, and no one was able to point out a specific individual who may also have been responsible for throwing the stone.

"The assault was an isolated event," Bull said.