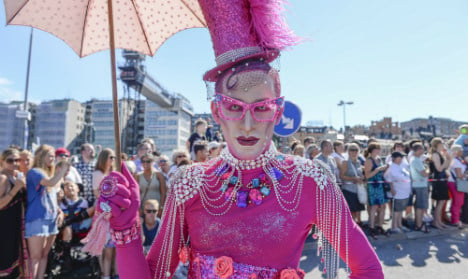 Stockholm Pride 2013. File photo: TT
The Pride Parade, the traditional climax to the week long Pride festival is due to bring a little colour to the Swedish capital's streets this afternoon.
The weather is expected to raise the heat of the party crowd a few extra degrees with temperatures of up to 28C forecast.
According to Swedish weather agency SMHI there remains a chance of a cooling shower however with thunderstorms threatening as a front pushes in from the Baltic Sea.
In pictures: Stockholm Pride
Similar potentially turbulent weather is forecast for the remained of Svealand and Götaland, Värmland and highland areas.
The sun however continues to shine in the northern areas however in what is fast becoming an epic summer.
There are however indications of a cold front pushing in from the west which could bring a little rain although this dip in the searing summer heat is expected to be only a temporary blip with Monday highs of 30C forecast.
In pictures: Conchita Wurst at Stockholm Pride
"Humid air, typical for August," said Therese Fougman at SMHI.
From Tuesday temperatures are expected to drop off a little across the country, back to what is considered normal for the season.