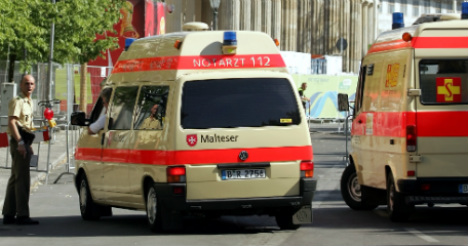 A German ambulance. File photo: TT
Police had received several calls from concerned locals who had spotted the vehicle driving at high speed and with blue lights and siren turned on in the province of Småland in southern Sweden.
The story unfolded when the police finally caught up with the ambulance in Värnamo.
"They were fetching a patient outside of Eksjö. But when one person in the ambulance fell ill the driver rushed the patient to the hospital in Eksjö," said Bo Gunnarsson at Småland police.
As there were now suddenly two people in the ambulance who were in need of medical transport the driver elected to speed back to Germany to collect a larger vehicle.
The driver has received a sharp reprimand by the police who took the opportunity to explained the traffic rules in Sweden.
"I've been through a bit in my time, but this is a little out of the ordinary," Gunnarsson said.
The closest route from Värnamo in Sweden to the German border at Puttgarden is 440 kilometres and requires a ferry crossing.