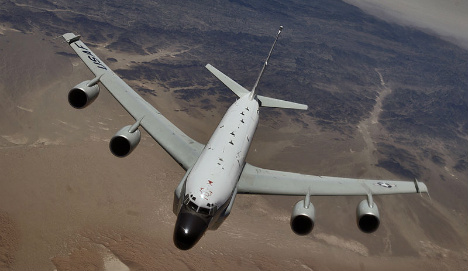 A Boeing RC-135. Photo: US Air Force
US authorities told the CNN news channel that the plane was conducting reconnaissance missions in international airspace when it was observed by Russian radar. Russia is reported to have scrambled aircraft to chase the US plane away.
The US crew elected to exit the area by the fastest route possible, which meant passing through Swedish airspace.
The flight passed over Gotland, an island off the east coast of Sweden, on July 18th in the late afternoon.
A classified document from the Swedish Defence Force, which was leaked last Wednesday, revealed that the mystery flight passed over Swedish airspace from the east. This information has now been confirmed by the US.
The plane, a Boeing RC-135, was denied permission to pass over Swedish airspace, but the pilots chose to disregard the refusal.
The US State Department told CNN that similar situations may arise in the future and that these scenarios are being discussed with the Swedish authorities.
Neither the foreign ministry nor the Swedish Defence Force have confirmed or denied the report.