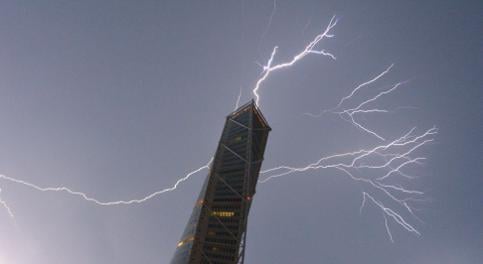 The Turning Torso in Malmö, in Monday's storm. Photo: Johan Nilsson/TT
Violent storms ripped through western Sweden on Monday, leaving thousands of homes in Värmland without electricity and many homes damaged.
The roof of one house in Kristinehamn was completely blown off. The weather has also seen train lines stopped after large trees have been uprooted and have fallen across the tracks.
The town of Karlstad saw at least 100 trees falling, reported the TT news agency.
IN PICTURES: The storm in Malmö
But the drama wasn't just on the ground. A passenger plane heading from Stockholm to Oslo was forced to land in Karlstad to avoid the worst of the weather.
And in what has become an unusual month of extremes, Monday also set a seasonal Swedish record for warm weather with Falun in central Sweden recording 35C  – the highest August temperature in the country since 1992, when the mercury reached 36C in Målilla.
Meanwhile, a bushfire in central Sweden has been burning for six days and has claimed the life of one Swede. Follow our live updates here.
Going forward, Swedish weather agency SMHI predicted cooler weather and more rain, with strong storms likely to move in from the south east on Tuesday night.
While the storm is expected to his Götaland, Öland and Gotland, meteoroligists said Norrland would be the hardest hit and could expect "extremely powerful thunderstorms".