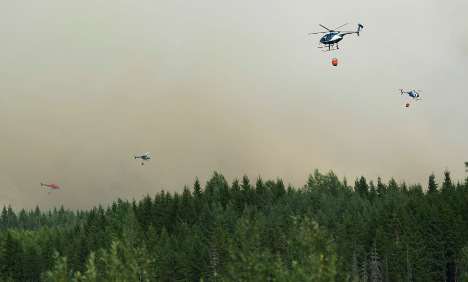 Photo: Fredrik Sandberg/TT
Sven Hedblom, 78, has lived in Västerfärnebo all his life. His father was even born there. The village, population of around 500, is 20 kilometres west of Sala, where a massive bush fire has raged for the past six days.
"We could see the flames against the sky last night," he told The Local on Tuesday. "And there's smoke everywhere here. But what's really strange to think about is that a big fire in 1959 started in almost exactly the same place as this one did."
"But that one was nothing compared to this one. It was much smaller," he recalled. "They're saying that 15,000 hectares are burning. This is a catastrophe."
Now that the winds have died down, Hedblom said he doesn't anticipate any problems for people in his village.
In pictures: take a closer look at the forest fire
As yet, residents of Västerfärnebo haven't been told to evacuate, nor even to prepare for evacuation like nearby residents of Norberg.
"But when you're as old as we are," Hedblom said, "there's not much you can do."
"I don't think people are scared but there's an uncomfortable feeling in the air. Quite uncomfortable."
The bushfire has been ranked as the worst in Sweden's modern history. In 1992, a fire scorched the Baltic island of Gotland, sweeping across 1,000 hectares. No one was killed.