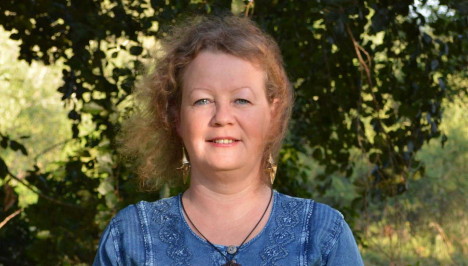 Photo: Private
Kicki Karlén rocketed to internet fame this week after she found 80 skeletons in Ikea bags beneath a church floor in southern Sweden.
Her tale was rewritten in papers across the world, including the UK's Daily Mail, the Huffington Post, and even German paper Bild (and many, many more).
When The Local chatted to Kicki Karlén on Monday morning, the erotic novelist hinted that she was "tempted" to write a book on the find.
By Tuesday, she contacted The Local again to say that not only was the book completed but that it was available on Amazon.
"In just a week I went from being a normal silent person to being known all over the world," the blurb reads. The book, "The story about the bones in the church", is available in Kindle edition together with some of her other titles including "Eroticism at Full Moon" (Erotik vid Fullmåne).
At a cost of $6.25, the 30-page short story comes with a strong warning about the accompanying pictures, some of which have yet to be published elsewhere.
Claiming that she never wanted internet fame, Karlén said that the most important thing to her was always that the bones were respected.
And as luck would have it, the week also brought about some good news for the 50-year-old Swede, when the village pastor announced the bones were to be reburied.