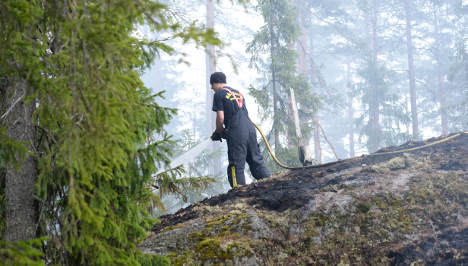 Photo: Maja Suslin/TT
"We know nothing and don't get to know anything. It feels horrible," Leo Karjalainen, 47, told the TT news agency.
Karjalainen, who has a farm near Västerfärnebo, decided to leave his home along with his daughter and animals on Monday.
"We ran away. It was panic, we saw the fire on the other side of the lake, the flames looked several hundred metres high."
The Swede was critical of how the authorities have handled the matter.
IN PICTURES: See more of the fire Sweden's King Carl Gustaf was on the scene on Wednesday. Photo: Pontus Lundahl/TT
"It feels like they're completely clueless. They should have made a bigger deal about it from the beginning and started the evacuation much sooner. If it hadn't been the local people helping each other many more animals would have died," he lamented.
County Governor Ingemar Skogö said the county council was doing its best.
"We've received some criticism and we'll look into it," he said. "Right now the focus is on solving this."
Emergency services spokesman Lars-Göran Uddholm added that his team was trying to be as clear as possible, and that nearby residents should be prepared to leave at a moment's notice.
The fire, which has burned for seven days, has already claimed the life of one Swedish man.
Water bombing planes from France and Italy have been called in to help extinguish the flames, but have had to stay stationed at nearby airports as the smoke has proven too thick to allow worthwhile firefighting efforts.
The Local/iv/TT