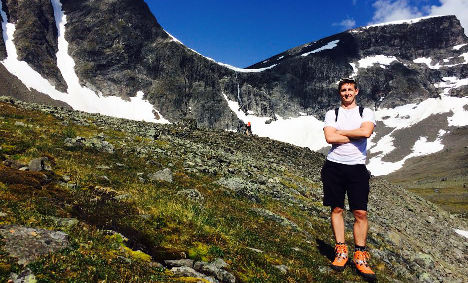 Oliver Gee and Kebnekaise (to the right).
Instead of ruining a good tale of mountain climbing by getting too deep into the nitty gritty, I figured I'd make a new page for my tips.
Here are my top five if you're thinking about scaling the 2,107 metre beast yourself. Good luck.
1. Water
There are plenty of places to fill your water bottle along the way, but it's impossible to know where. Drink as much as you can at each stream, because you never know how long it will be before you get a chance to refill. All the water along the way is safe to drink, but make sure it's running. I managed with a 600 mL bottle. Bonus tip: There's not much water on offer after the final dip before approaching the summit. Stock up.
IN PICTURES: See more images from the mountain
2. Don't get lost from the beginning
Be sure to keep to the right when you're leaving the base camp. Three people I met veered left and got lost for hours. You have to follow the red dots, and keep an eye out for the sign saying Västra Leden (below). If you haven't seen a red dot for more than five minutes, turn back.

The Västra Leden. The beginning. You can't even see Kebnekaise from here. It's off to the right somewhere. pic.twitter.com/tOOXD0aXf2

3. Pack lightly
This is a no brainer. I packed only food, water, and warmer clothes for the top of the mountain. Some people took gear for cooking food, which was crazy if you ask me. You'll have to carry that for 20 kilometres, remember. Is that warm meal and coffee really that important?
4. Footwear
Get hiking boots. Don't even think about walking up in sport shoes. They rent them out for 200 kronor ($25) a pair at the camp. A wise investment if you don't own some already. The terrain is unpredictable – there are loose stones, stream crossings, and extremely uneven surfaces. I saw just one man climbing the mountain in sports shoes, but he was also running, so we can conclude that he was a lunatic.
5. Mosquito repellent
This is a big one. I always thought people were exaggerating when they talked about the mosquitoes in northern Sweden. But they're not. In the Kiruna tourist information centre, they honestly sell postcards with pictures of mosquitoes. They're the real deal here. Be prepared.
Click here to read the full story of Oliver's mountain climb, and here for more pictures.
Read also: The Local's ultimate guide to travel in Sweden
Article first published in 2014. Oliver now lives in Paris and hosts The Earful Tower podcast. Follow him on Twitter here.