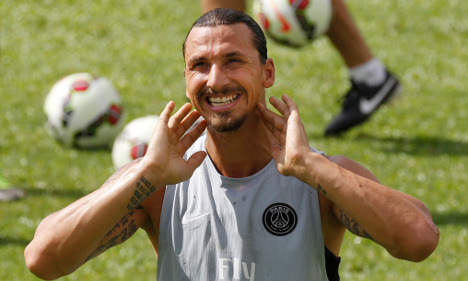 It was business as usual for Zlatan Ibrahimovic as he scored both goals against Guingamp to win France's season-opening Champions Trophy for Paris Saint-Germain in Beijing last weekend.

One long-range thunderbolt and then a penalty had the Ligue 1 title-holders on the way to a 2-0 victory inside just 20 minutes, and gave the rest of France a glimpse of what could be to come in the season ahead.

In a poll in the popular sports daily L'Equipe this week, 81 percent of those asked believed PSG would win a third successive championship and 65 percent said that the Swedish striker would be the top scorer for the third year running.

Other world-class talents, such as Edinson Cavani, Radamel Falcao and James Rodriguez, have come, and in the latter's case, gone from France in the last two years, but none can rival Zlatan's personality on or off the field.

His presence may spell trouble to PSG's rivals, but his importance to the overall image of a French game which struggles to generate the same level of interest as its English, Spanish or German counterparts cannot be underestimated.

With a total of 1.84 million, Ibrahimovic has more Twitter followers than any French club, PSG included, and PSG's Twitter homepage is emblazoned with a picture of the Swede celebrating a goal.

Speaking of goals, he has already rewritten records since arriving in France from AC Milan in 2012 and he is on course to keep on doing so in the campaign ahead.

In 2012-13, he became the first player to score 30 goals in a French top-flight season since Jean-Pierre Papin for Marseille in 1990 and he followed that with 26 goals in the last campaign, 10 more than any other player.

Despite missing much of the latter stages of last season due to injury, he still mustered a total of 40 goals in all competitions, beating the previous individual club best of 39 set by Carlos Bianchi in 1978.

As a result, he already lies sixth in the capital club's list of all-time leading scorers, with 78. And if he keeps scoring at his present rate, he could overtake Pedro Pauleta's record tally of 109 this season.

"When I came to Paris, I said that I wanted to make history," said Ibrahimovic after beating Guingamp last weekend.

"I am starting my third season here and we have already won five trophies.

"I still have a strong desire to win every match. We have written our names down in history and we continue to do so."

However, it remains unclear exactly where the footballer's future may play out. News emerged on Wednesday that Ibrahimovic had recently spoken with former Malmö coach Stefan Hansson and mentioned that he'd be keen to return to Juventus, and that it "wouldn't be about the money," reported the Expressen newspaper.

He has already won nine league titles in spells in the Netherlands, Italy, Spain and France, but the main goal for 'Ibra' now must be to win the Champions League, a competition in which he has often failed to deliver in the biggest matches.

He will turn 33 in October, so there will not be many more chances for a player whose contract at the Parc des Princes runs through to 2016.

But he comes into this season seemingly more settled and fresh than ever before.

Sweden's failure to qualify meant Zlatan did not take part at the World Cup, although he was still one of the last PSG players to report back for pre-season training.

But having declared that "a World Cup without me is nothing to watch", he did make it to Brazil and was spotted alongside PSG president Nasser Al-Khelaifi in the crowd as Spain lost to Chile and Uruguay beat England, with his colleague Cavani playing a starring role.

In Paris, coach Laurent Blanc has yet to work out a way of getting the best out of Cavani and Ibrahimovic together in the same side, but the latter's objectives are clear.

"Do better than last season. We had a fantastic season winning three trophies," he said.

"We are focused on keeping this project growing and moving forward. There is pressure on us but the players who are here are used to that. To say that we are a great team is not enough. We have to prove it on the field."