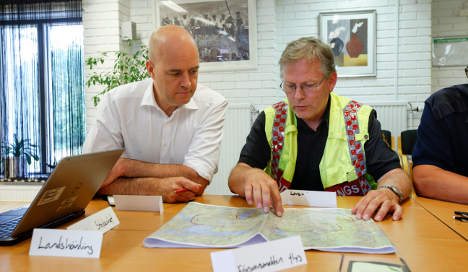 Prime Minister Fredrik Reinfeldt was on hand at Ramnäs, near the scene of the fire that has swept central Sweden for eight days. He said he was there to see the rescue efforts, and he also took the chance to discuss the criticism Sweden has faced over its handling of the fire.

"Many people are angry and critical, and they think things aren't working the way they should be," Reinfeldt said. "We'll take that into consideration."
Before the press conference, he defended Sweden's decision to not purchase its own planes with water bombing capabilities.

He said that an investigation in the nineties found that Sweden did not need to buy such aircraft due to the fact that they were too expensive, needed too much expert knowledge to maintain, and that so many neighbouring nations owned similar planes and would be ready to help – just as Sweden often helps other countries in need.

Newspaper Aftonbladet also revealed on Thursday that Sweden turned down the offer of Russian water bombing planes, but Reinfeldt explained that the decision, made by the emergency team on the scene, was one of practicality and timing.

In a central Sweden hospital, a man who was burnt in the fires earlier in the week suffered a deterioration in health, with his condition reported to be life threatening. Another man died in the blaze on Tuesday morning.

Later on Thursday, a policeman sustained serious injuries when a suspected drunken man ran him over on a moped. The officer's condition is stable, but his injury was described as serious.

Thursday has been busy for the firefighters, with two French water bombers and two from Italy finally joining the fight after lengthy delays due to smoke reducing visibility.
Authorities reported on Thursday that large parts of the fire were extinguished.
IN PICTURES: See more of the fire

Photo: TT news agency
Speaking with the Aftonbladet newspaper, one of the French pilots explained that the team was targeting the ring around the fire, dousing greenery in an attempt to stop the flames in their tracks.
With wind predicted to pick up on Thursday, the pilots have especially targeted areas where the fire is expected to spread.
The water bombers were called in due to their ability to carry more water than the Swedish and Norwegian helicopters on the scene. The planes can pick up 6,000 litres of water in just several seconds.
The firefighters plan to work for 14 hours on Thursday, Niklas Ekstrand of the Defence Force (Försvarsmakten) told the TT news agency.
The fire is estimated to have already burnt 100 square kilometers of forestry so far.
Read also: A pensioner's tale – This is much worse than the one here in '59