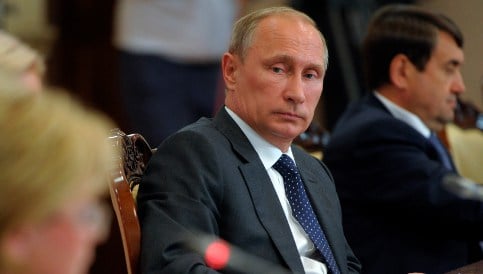 Vladimir Putin. Photo: Alexei Druzhinin/TT
Following tougher sanctions from the US and the EU, Russian president Vladimir Putin declared on Wednesday evening that he would be halting all imports of agricultural products from all the sanctioning nations.
The list of banned products includes all fruit and vegetable products produced in the EU's 28 nations.
Swedish Finance Minister Anders Borg was in Washington, DC for the US-Africa Summit earlier this week, where the subject Russia was high on the agenda.
The minister said that he supported Obama's sanctions against Russia, but suspected there would be serious repercussions for Swedish businesses.
"Sweden is behind the sanctions entirely, even if they're a blunt instrument," Borg told newspaper Dagens Nyheter.
"The sanctions will hit  Swedish and European businesses and financial systems, in this situation the politics are primary."
The majority of Swedish food exports are to the other Nordic nations, with Denmark, Finland, Norway, and the US as the largest markets. About 65 percent of Swedish agricultural imports also come from within the EU, with Denmark and non-EU neighbour Norway high on the list.
Swedish food and agricultural exports to Russia are worth about 670 million kronor ($97 million), only slightly more than one percent of Sweden's total agricultural exports.
In fact, Swedish companies selling oil and egg powder used in Russian mayonnaise may be the only companies which see an immediate and serious effect, news agency TT reported.
But while Russia's retaliation may not impact Sweden immediately due to weak agricultural connections, the action will still have repercussions on the Swedish economy.
Borg said the economic effects of the sanctions would be indirect, but tangible, as stunted growth in the Russian economy will come back around to strike Sweden's economy. Several experts have predicted that the tough sanctions will shatter Russia's fragile economy later this year.
"The major effects on Sweden will come indirectly, as Russian growth decreases," Borg said.
Russia delivers commodities, particularly crude oil, to Sweden, and Sweden supplies Russia with services and technical exports, such as automobiles and telecommunication products.
Trade between Russia and Sweden sky-rocketed between 1998 and 2011, but has dropped significantly over the past few years.
Russia's agricultural watchdog will release a list of all banned products in the counter-sanctions on Thursday evening.