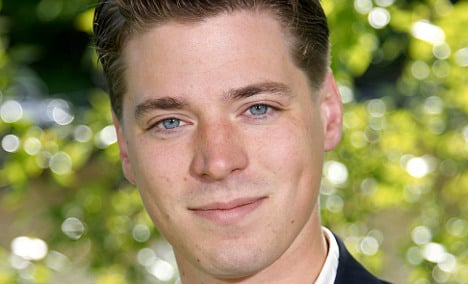 Photo: Moderaterna
Hravn Forsne, 25, is aiming for a seat in Swedish parliament as part of the centre-right Moderate party.
The story, however, made waves in Sweden on Friday when Forsne revealed for a local newspaper that he was the son of France's longest serving president, socialist François Mitterrand, who ran the country between 1981 and 1995.
Forsne's family tree has never been publicly confirmed, and as recently as 2012 his mother refused to address the topic when probed by the Aftonbladet newspaper.
In the interview, she revealed that she had been in a 15-year relationship with the French politician. But when asked if Mitterrand was the father of Forsne, she responded "I'm willing to talk about my relationship with François Mitterrand. But I'll not talk about anyone else who is close to me."
Forsne gave an exclusive interview with the local Kungsbacka-Nytt newspaper on Friday, in which he revealed that he is indeed the son of the former Socialist Party leader, who died in 1995 of prostate cancer.
"I want to be judged for who I am, not who my father was," he said.
And when it came to his political influences, he added that it was sooner his journalist mother who shaped his political ideologies than his father, who he only met "five or six" times.
When contacted by The Local, Forsne said that he refused to speak to any national media on the topic.