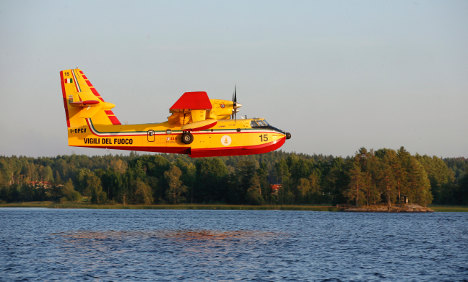 Photo: Fredrik Persson/TT
People who have evacuated homes on farming lands south of Västerfärnebo may now return home, as well as those living in the area 100 metres east of Highway 668, between Ramnäs and Ängelsberg.
However, those who live east of the road between Ramnäs, those who live in Virsbo, Ängelsberg, and the area between Highway 668 and the Snyten lake are not yet allowed to return.
Helicopters took off at 4am on Friday, joined by French and Italian water bombers at 6.30am. Several of the planes experienced technical problems during the morning but were restored into action around 10am.
Authorities said they were hoping for similar weather to that of Thursday, with cooler temperatures and lower wind levels compared to the rest of the week.
"If that's the case then I don't see any risk of the fire spreading," Marcus Johansson of the local county council told the TT news agency.
Read also: Firefighters told me I had to leave immediately
Firefighters are working primarily on stopping the spread of the fire by dousing areas that are as yet untouched by the flames.
The water bomber planes, five in total, are able to scoop up 6,000 litres of water from nearby lakes in just several seconds.
IN PICTURES: See the planes in action here Photo: Fredrik Persson/TT
The blaze, which has been classed as the biggest in Sweden's modern history, has claimed the life of one man and has left another with life-threatening injuries.