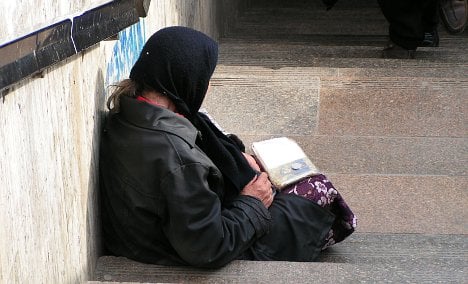 Photo: Alex Bricov
"Damn you parasites …," was how Joacim Benes described beggars he had had an altercation with in a post on Facebook, according to a report in the Smålandsposten daily.
"They are a disgrace to their country and mess it up for those who actually need help," he added.
Benes, who is a Moderate municipal councillor in Växjö and chairman of the Swedish Federation for Lesbian, Gay, Bisexual and Transgender Rights (RFSL) in Kronoberg, defended his comments when the newspaper called.
"It describes a single individual, not the whole group," he said.
Benes is also reported to have written on Facebook that he had not had "very positive experiences of Roma who think they can take advantage of your generosity".
The Facebook comments were removed after Benes' interview with the newspaper, although not before they had drawn the attention of the party hierarchy.
On Friday evening the Moderate Party in Växjö issued a statement stating that Benes had resigned from all his political positions in the municipality.
"I profoundly regret and am ashamed of what I wrote. It was one of the most stupid things I have done in my life," Benes said in the statement.