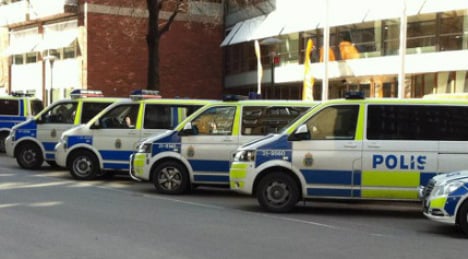 Police vehicles in Stockholm. File photo: TT
The pair had gone into the room at the Kfem shopping centre in Vällingby in western Stockholm and found themselves locked in when the door slammed shut behind them.
"They went into a room and the door with the handle missing slammed shut. Therefore they could not get out," said Lars Byström at Stockholm police.
The children were reported missing at around 4pm on Saturday, prompting an extensive search operation.
Despite the deployment of a helicopter and the participation of some 80 volunteers from the organization Missing People, it took until just before midday on Sunday before they were found, safe and sound.
The shopping centre was one of the first places to be searched although the more sweeping search offered up no clues initially.
"We then found them when we searched again. All's well that ends well," said Byström.