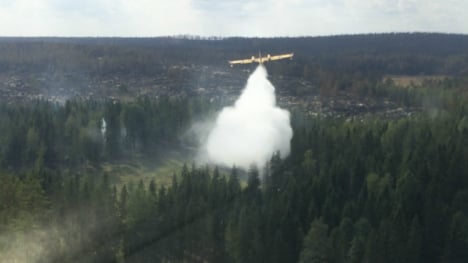 Photo: TT
"We are worried about the wind and have every reason to be," said Lars-Göran Uddholm, the leader of the team fighting the fire.
Following a meeting on Saturday with the rescue team in Ramnäs, concern has grown that the challenge facing firefighters is at its most difficult since Monday, Uddholm said.
"It's much hotter and the wind is starting to pick up. It's the weather we absolutely did not want. The wind has also come a little earlier than expected. The intensity is increasing."
The emergency services are therefore readying their resources.
"In the most threatened areas round Ängelsberg we are doing everything we can. It will definitely flare up, but we'll do our best to make sure it does not spread."
Uddholm warned furthermore that there is a risk of further evacuations.
"We cut back the evacuated area yesterday (Friday) and people were allowed to return, but today the area is in danger again. But we said yesterday that they would need to be prepared with very short notice," he said.
The situation is deemed so critical that the loan of Italian and French firefighter planes has been extended.
The five specially-equipped planes were set to return to their respective countries on Sunday  but Italy and France have agreed that they can remain in Sweden until August 15th.
The planes and helicopters were deployed in the vicinity of Lake Snyten on Saturday afternoon, according to county authorities.
According to the latest weather forecast help could be in store from the skies with considerable rain expected during Sunday.
"It may be only a few millimetres if we are unlucky. If we are lucky there will about 10 millimetres. But the centre of the rain area will not be right there, but over Värmland and Dalarna," said Alexandra Ohlsson, a meteorologist at weather agency SMHI.
Rain is however likely to miss Västmanland on Sunday but a new front pushing in across Sweden on Monday could bring up to 15 millimetres to the fire-ravaged area.
Surahammar municipality has meanwhile warned that the battle to control the fire may have led to local water supplies being contaminated. Residents of the town of Gammelby have been advised to boil their drinking water and those with access to their own wells in the area have been told to collect water from the mains supply.
Following air reconnaissance on Sunday, response teams have gathered information regarding the number of properties damaged in the fire.
"Around 20 houses are confirmed to have burnt down, but it can be more," said Maja Geffen at the emergency services headquarters in Ramnäs.
The condition of the 42-year-old man who was injured in the forest fire earlier this week has meanwhile improved, according to Linköping University Hospital.
The man's injuries are now considered to be serious and not life-threatening as before.