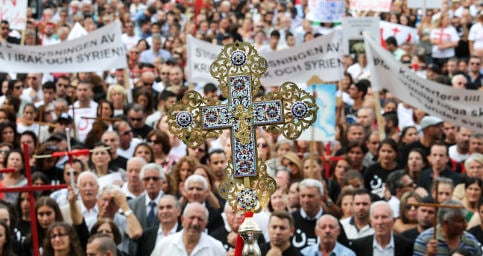 On Sunday afternoon thousands of Stockholmers gathered on Medborgarplatsen, demanding protection for the Christians in Iraq who are fighting for their lives.

"We ask that an autonomous protection area be established for the Christians in northern Iraq, under a UN mandate," demonstration spokesman Gabriel Marawgeh told Sveriges Television at the event.

"We also ask that those who have fled from persecution be compensated by the government of Iraq for everything they have lost, so that they can rebuild their lives and their sanctuaries."

"Medborgarplatsen was completely full. There were at least 6,000 people, maybe closer to 10,000," Marawgeh said.

See pictures from the demonstration here Many of the protesters carried signs, stating "Shame, Swedish media, for your silence" and "Convert to Islam, pay unreasonable taxes, and still die under the sword".

"The entire western world needs to wake up," he said in his speech at the demonstration.

"We are standing before a civil genocide. There have been far too many incidents in history when we have said afterwards, 'Why didn't we do anything when it happened'?"