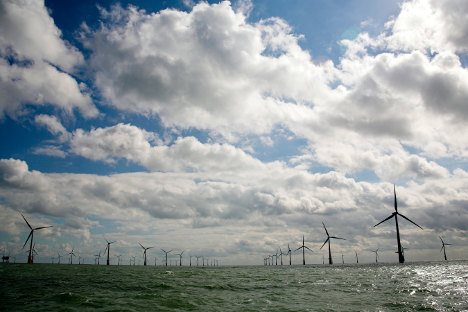 Another of Vattenfall's wind farms, off the UK's coast. Photo: TT
The wind farm, named Sandbank and located close to Danish territorial waters, will include 72 turbines and will cost 11 billion kronor ($1.6 billion).
The project is intended to generate an estimated 1.4 terawatt-hours of electricity annually – capable of supplying 400,000 homes.
"The Sandbank project is further testament to Vattenfall's strategy of consistently focusing our growth efforts on the expansion of renewable energy," said an executive responsible for renewable energy, Gunnar Groebler.
Vattenfall will have an interest of 51 percent in the project.
The state-owned Swedish company – which run 900 turbines in Northern Europe and Britain – said in a statement that it was the world's second-biggest offshore wind power operator at the end of 2013, accounting for one eighth of activity.
Construction is due to get underway in 2015 and the wind farm is expected to supply the German national grid in 2017.
It will be the second joint North Sea wind farm venture between Vattenfall and the city of Munich. The first, known as DanTysk, with 80 turbines is due to start operating in 2015.
Munich's investment was the first since a new German law on renewable energy came into force on August 1 which included a cut in state aid for offshore wind farms.