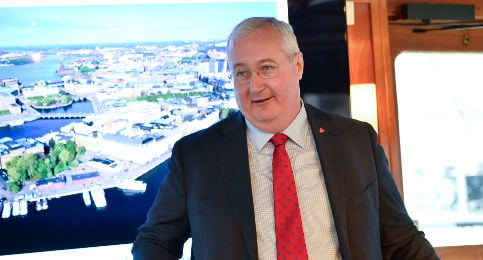 Stockholm Major Sten Nordin. Photo: Henrik Montgomery/TT
"Validation of immigrants' qualifications and education will improve," the Christian Democrats' Erik Slottner announced when the Stockholm Alliance released its local election manifesto on Tuesday.
Slottner did not go into details about how this would be achieved, but added that all of the Alliance's goals could be reached with "one of the country's lowest municipal tax rates".
Stockholm has been run by the four party Alliance, consisting of the Moderates, the Christian Democrats, the Centre Party, and the Liberal Party (Folkpartiet), since 2006, when it wrested power from the Social Democrats. Much of the coalition's manifesto focused on jobs, mirroring the national political discourse.
The coalition promised 140,000 new jobs by 2020 in Stockholm alone, with a specific target of hiring more teachers and creating more summer positions for young people. They also promised 140,000 new homes by 2030, increased teacher salaries, and ten new metro stations in Stockholm.
"The continued leadership of the Alliance is the only guarantee for more jobs and housing in Stockholm,"  mayor Sten Nordin, a Moderate, said at the press event.
The group also promised to increase teacher salaries and add 2,000 electric car charges throughout the city.
The Alliance in Stockholm has won the past two elections and is hopeful of a third round. However, a survey by pollster Sifo in May found that the opposition red-green parties had 50.1 percent of Stockholm voter support, while the Alliance only had 39.2 percent.