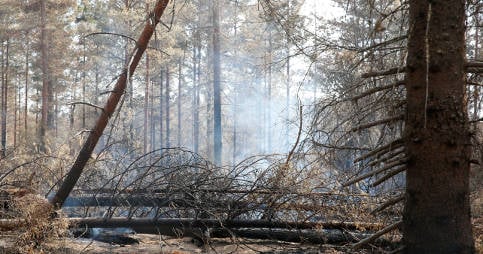 The aftermath of the fire. Photo: Fredrik Persson/TT

Water-bombing planes and heavy rains earlier this week helped put a damper on Sweden's forest fire in Västmanland, which started late last month and forced over 1,000 people to evacuate their homes.

But although residents were finally able to return home this week, emergency services warned against trying to get back to daily life too soon.

"It's understandable that landowners want to investigate how badly their lands were hit by the fire," forest expert Lars Ambrosiusson said in a statement. "But it is still too early to enter the fire area."

Authorities explained that while flames may not be visible on the surface, roots down below may still be smouldering despite rain and even snow. There is also a high risk of falling trees, as roots may have been burned away, leaving the trees unstable. See pictures from the fire here