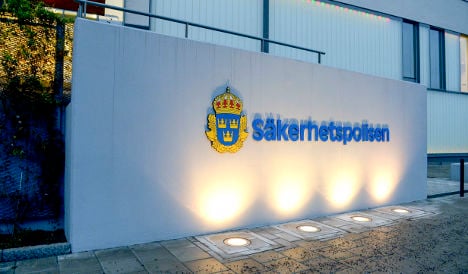 The Swedish Security Service (Säpo) has received a number of worried calls since a video clip from an Arabic talk-show programme started making the rounds online.

On a recent episode of the popular Arabic talk-show programme Su’al Jari (Bold Questions), a man called in from Sweden and proceeded to threaten the country with extreme violence. (See video below, with Swedish subtitles).

"Until the day we die, we will engage in war against Sweden and Europe," the man said.

Swedish Security Police (Säpo) spokeswoman Sirpa Franzén said that the reactions from Swedes had been strong.

"Many people are upset since the video and other information is being spread online in connection to the situation in Syria," she told newspaper Dagens Nyheter (DN).

The caller, identified in the show as Sheikh Ahmed, said he was a member of the jihadist group IS (Islamic State, previously ISIS, Islamic State of Iraq and Syria) and began making references to the Koran, saying that god had given Muslims instructions to kill non-believers.

The talk show is hosted by Rashid Hmami, a Moroccan who converted from Islam to Christianity when he was 19. Hmami proceeded to grill the caller about verses of the Koran and his methods of enforcing his religion.

"So why do you live in Sweden? Why do you live in a land of unbelievers? You know that it is haram, forbidden for Muslims," Hmami pressed.
"The Islam country is God's country which is the entire world," Ahmed responded.
"And you receive benefits from Sweden. You take advantage of the state and its welfare and money."
"No. It is not their money," the caller said. "The money can only come from god."
The conversation developed into a debate about god's tasks and the concept of mercy and forbearance, with the caller claiming that it was god's command to kill non-believers in order to save his own people from doubt.
"Is what ISIS doing to non-believers today simply mercy?"
"The purpose of Isis is to eradicate them," the caller asserted.

Linus Gustafsson at the Swedish National Defence College said the probable investigation would determine whether the caller is indeed a threat.

"And it will determine whether he actually has the capability to turn this threat into a reality," he told The Local.

Gustafsson added that there were 80 confirmed Swedes fighting in Syria and that this particular threat should be taken seriously.
Most of the radical Islamists in Sweden, he said, were second-generation immigrants, but that doesn't mean the problem stems from immigration, rather the glaring lack of prevention programmes and exit strategies.
"Sweden is lacking effective measures to prevent individuals from becoming radicalized, and becoming a threat when they arrive in Sweden," Gustafsson explained.
The researcher stressed that reforms are needed to prevent not just Islamist extremism, but extremism in general.
A few years ago Exit Fryshuset, a non-profit organization offering support for those wishing to leave racist and Nazi movements, opened in Stockholm. Gustafsson said that Sweden needed many more such institutions and a stronger focus on prevention.
"Many other states in Europe have prevention programmes and exit strategies," Gustafsson said.
"It can be done in several ways, but the most common is to create an organization with psychologists, social services, security services, and community police who will establish a relationship with the person and offer counselling and mentoring to get back into society."
He added that Sweden is seeing an increase in "the populist right and the right-wing propagandists taking advantage of every Islamist threat". Indeed, Sweden Democrat leader Jimmie Åkesson made headlines earlier this month for stating that "Islamism is the Nazism of our time".
IN PICTURES: Kurds protest against ISIS in Stockholm
In July, Sweden appointed its first-ever official coordinator against violent extremism, former Social Democrat party leader Mona Sahlin. Gustafsson said that the appointment was both a welcome initiative and a critical step in the right direction.
Sahlin's new tasks will include improving cooperation between agencies, cities, and organizations on a all levels of society to prevent and address violent extremism.
"We are far behind compared with other European states when it comes to prevention," Gustafsson told The Local.
"While the problem is being discussed in some municipalities and in the cabinet offices, we haven't seen any measures on the local levels yet, and that's what really counts. It doesn't matter if you have a good strategy if you don't implement it."
Solveig Rundquist Follow Solveig on Twitter