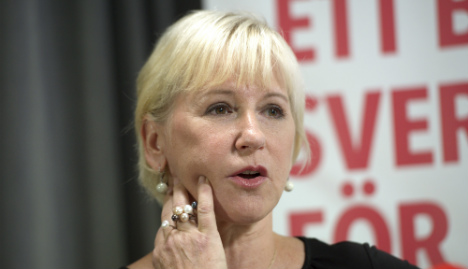 Photo: TT
"I want her on the team, both in the campaign and after," said party leader Stefan Löfven.
While Wallström has been tipped to be a candidate for the post of foreign minister, Löfven remained coy on the exact role the former minister is set to play stating that ministerial roles will not be allocated in advance of the election.
Wallström herself declined to specify which role she would most like in a Social Democrat-led government and stated that she has received no promises.
"I will be an election workers among all the others," she said to the TT news agency.
Wallström has been away from the Swedish domestic politics since leaving 1998 and has served two terms as EU commissioner and Special Representative of the UN Secretary-General on Sexual Violence in Conflict
She has repeatedly declined overtures from the party to return to Swedish politics in the past and explained on Thursday that Stefan Löfven was a key factor in her decision which she has come "at the right time".
"It is such an important time, such an important choice. I feel there are so many things that are going in the wrong direction. I don't want to live in a society with such huge gulfs," she said.
In her absence from Swedish politics, Wallström has attained an almost mythical status among the party faithful and experts argue that the announcement is a boost for the Social Democrat election campaign.
"Wallström is still one of the Social Democrat's brightest stars. Media-savvy, universally popular and with a good track record from both the EU and the UN. An obvious candidate for the post of Foreign Minister," said PR consultant Patrick West Anderson.
In the election campaign Wallström will take charge of the party's environment policy.