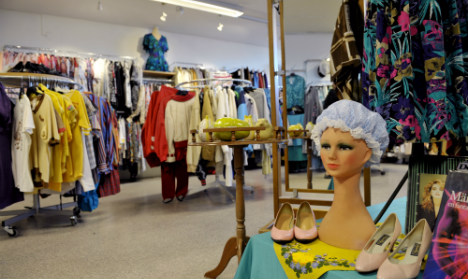 Photo: TT
According to a report from the Environmental Protection Agency (Naturvårdsverket) the reuse of textiles increased by 16 percent in Sweden between 2011 and 2013 while the consumption of new textiles declined by 9 percent over the same period.
Maria Sandow, an expert in sustainable commerce, is meanwhile not surprised at the development.
"It is in line with our assessment. We know that the fashion industry has had a pretty tough period," she said.
"This fits with both an increased interest in second-hand and the desire to wear clothes longer. But it may also be due to shifting priorities, such as travel and electronics."
Sandow explained that Swedes' view of second-hand clothes has also changed in recent years, in comparison to other countries.
"Here it's not 'embarrassing' to wear old clothes, while in other countries it is associated more with a lack of spending power."
The fashion industry has meanwhile responded to the trend by experimenting with sustainability. It is investing in clothes that last longer and is considering how fashion items are designed in order to facilitate recycling.
In response to a question as to how customer demand impacts sustainable thinking in the fashion industry, Sandow replied:
"I think it is becoming increasingly important. One should not believe that all consumers are behind it, but it's only a matter of time."
The second-hand, often called retro or vintage, market is dominated by charities who stand for 87 percent of recycled textile sales. But just because the trend is old-fashioned doesn't mean that the customers are, with online sales increasing by 33 percent from 2011-13.
The majority of textiles collected by charities still gets exported however but this proportion has dropped from 68 to 62 percent between 2011 and 2013.
"The key development which might have helped is that charities have professionalized their operations," said Maria Elander, project manager for the Environmental Protection Agency report.
Elander also touched on changing attitudes to wearing "something old" has led to charities taking a larger slice of the Swedish clothing market.