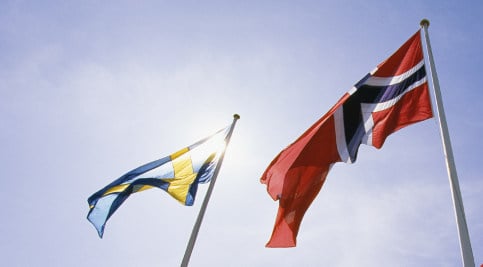 The Norwegian coastal town of Moss celebrates an historic chapter in Norway's and Sweden's past on Thursday. The Norwegian royal family and various politicians will be attending the official celebration to remember the Convention of Moss, signed on August 14th, 2014.

Read the full story on The Local Norway.

The little southern Norwegian town was where, exactly 200 years to the day, the Moss treaty was signed,  a ceasefire agreement between Norway and Sweden that ended the last war between the two countries.

The Convention of Moss is actually two documents, written on cloth. Not only is it a ceasefire agreement, but it is also a political document that laid the basis for Norway being able to keep its constitutional laws even as part of a union between Norway and Sweden was formed.

In a sense the Convention of Moss gave both parties what they wanted: Norway maintained an image of independence and the idea that it had entered union with Sweden voluntarily, but Sweden still ruled de facto over Norway.

The union of Sweden and Norway, built upon the Convention of Moss, lasted until Norway declared independence in 1905.