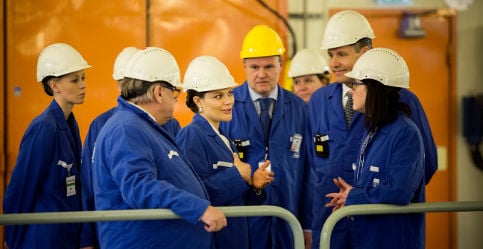 Crown Princess Victoria on a visit to a nuclear facility in Oskarshamn. Photo: Björn Wanhatalo/TT

"I think this is a very positive development," Education Minister Jan Björklund told newspaper Dagens Industri, which revealed the potential project on Thursday. "It's a huge research investment."

The proposal is currently awaiting a decision from the Swedish Research Council, which is scheduled to give the government an answer by October 1st. If the council says yes, the new government will then get the final say.

The government specified that the reactor would only be for research purposes. But environmental organization Greenpeace said the suggestion was still a step in the wrong direction.

"Nuclear power is on the decline, and investors around the world are getting cold feet," Rolf Lindahl, in charge of nuclear issues at Greenpeace, told news agency TT.

"The market has already made its choice and the really big investments are being made in renewable energy."

The proposed reactor would be a "next generation nuclear reactor", or "Generation IV". Generation IV reactors have been designed primarily on a theoretical basis, and most of the world's active reactors are Generation II.

The reactor, if approved, will be built in Oskarshamn along the southeastern coast of Sweden, which already hosts three nuclear reactors. The project's price tag is estimated at 1.5 billion kronor ($217.9 million).