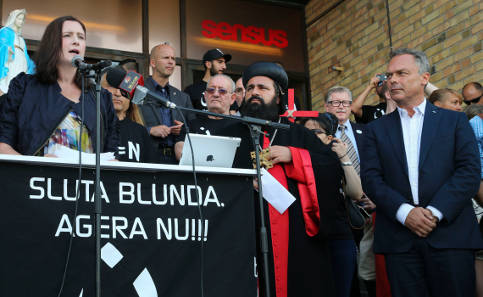 Under current Swedish law it is illegal to recruit for terror purposes and provide terrorist training. It is not, however, illegal to attend such training. Sweden's Liberal Party (Folkpartiet) thinks that needs to change.

"An estimated 20 people with Swedish passports have been killed in war in Syria," party leader Jan Björklund and democracy minister Birgitta Ohlsson wrote in the Svenska Dagbladet daily on Thursday.

"Across our country there are worried family members fearing that their sons, daughters, brothers or sisters might be recruited by an extremist group and labelled as terrorists by the EU or UN."

Linus Gustafsson, political violence expert at the Swedish National Defence College, told The Local on Wednesday that there are 80 confirmed Swedes fighting in Syria – but that there are probably more.

"Most of these men are second-generation immigrants, and when they go to these countries where there is war they risk becoming even more radicalized," Gustafsson said.

These numbers are also on the rise, according to the Swedish Security Service (Säpo).

Swedes began travelling to countries such as Iraq and Syria to fight with al-Qaeda inspired groups two years ago, the police said, and it is possible they commit war crimes while there.

"We do not see any signs of this trend passing," Swedish Security Police (säpo) spokeswoman Sirpa Franzén told news agency TT. "There is a risk of it accelerating."

Björklund and Ohlsson wrote that several other European nations already have laws against terrorist training in place, and argued that planning of a trip for the purpose of fighting with terrorists should also be illegal.

"Research shows that there is a connection between people who have been trained as terrorists abroad and those who carry out attacks in the western world," the ministers wrote.

"The Liberal Party believe it's high-time we change Swedish terrorist law to make it a crime to participate in terrorist training abroad."

Linus Gustafsson told The Local on Wednesday that the key to stopping extremism in Sweden is prevention programmes and exit strategies – which Sweden is sorely lacking.