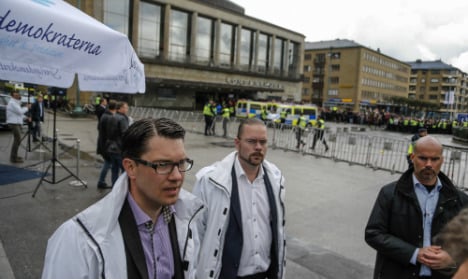 "It does sound like a bit of a contradiction," Jörgen Hermansson, political scientist at Uppsala University, told The Local. "You would expect that he would want them to go home. It definitely sounds interesting."

The Sweden Democrats party describes itself as "the party for real jobs", and one of the top job goals listed on the party's website is to "stop labour migration to low-end jobs".

Oslo is home to some 50,000 Swedes, many of whom left their home country to take advantage of free immigration laws to work in catering and menial jobs. Nevertheless, Jimmie Åkesson defended the stop as a natural part of election campaigning.

"Many Swedes live in Norway and we think it's a good idea to visit Oslo on our election tour," Åkesson said in a statement before his stop. "It will be exciting and interesting."

Martin Kinnunen, press secretary for the Sweden Democrats, said that the move was mostly aimed at increasing numbers of voters among the Swedes living in Norway. Indeed, only one of five Swedes living abroad votes in elections.

And given that one in five young people living in Oslo is Swedish, it's not remarkable that Åkesson is out after the votes.

"It's more of a rule than an exception that youth in this region look for their first job in Norway," Elisabeth Andersson at the Karlstad jobs agency said in a statement. "It's nearby, the availability of work is much better, and the pay is much higher."

Nurses can earn twice the salary in Norway as they do in Sweden. But highly-ranked jobs aren't the only ones shifting to Norway. The vast majority of Swedes working in Oslo work in hotels, shops, and restaurants – precisely the type of labour immigration the Sweden Democrats have said they want to prevent.

But Åkesson probably doesn't view working in Norway as such a negative thing, Hermansson said – simply because it's Norway.
"When it comes down to it, it's a question of culture and identity for Åkesson. He believes there is a deep-rooted connection and cooperation within the Nordic countries. Nordic people, and particularly Norwegians, aren't strangers."
Kinnunen confirmed his musings.
"We have no problem working with Norway. We would like an even more encompassing cooperation within the Nordics."
Simultaneously, Kinnunen said it's concerning that Swedes are going to Norway to get jobs which are available in Sweden.
"It's remarkable because we have significant labour migration to Sweden from countries outside of the EU to fill service jobs, and yet Swedes are going to Norway for the same jobs," Kinnunen told The Local "It's a troubling situation which creates problems for both the Norwegian and Swedish labour markets."
Kinnunen also said that the Sweden Democrats are hoping to attack at the root of the problem,  increasing pay and improving the work environment in Sweden "so that Swedish youth don't have to leave for work".
Youth unemployment is about 9 percent in Norway, compared with 24 percent in Sweden.
Åkesson's speech on Friday, held at Stortinget in Oslo, was met with mixed responses – and multiple protests.
"I'm against Swedes of the nationalistic type," demonstrator Martin Tjersland told Norwegian TV2.
Tjersland stood with his back to Åkesson throughout the speech. Other protesters stood with a large black banner proclaiming "No racists on our streets", and a drawing of a man with a baseball bat running towards SD's symbolic flower.
But supporters were also in place, with several people waving signs saying "Heja Jimmie" (Go Jimmie).
Of the three experts The Local asked, not one was aware of another Swedish party leader who had included international stops on an election tour. Hermansson said that the other parties could learn something from Åkesson's "tactical visit".
"It would be worthwhile for the Alliance to fight for votes from Swedes abroad," Hermansson said. "Politicians don't usually include Swedes abroad in such an active way." 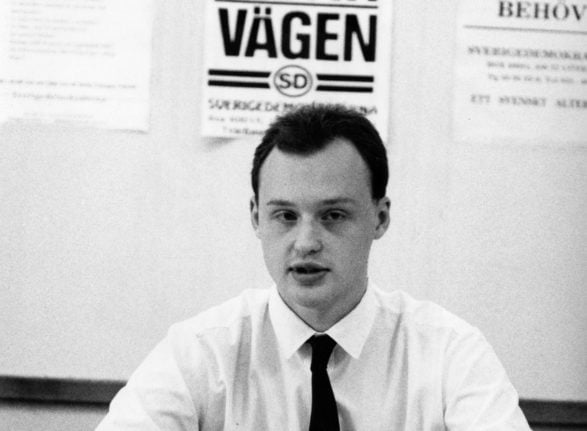