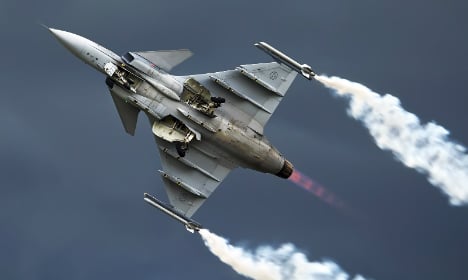 The Swedish JAS Gripen fighter will not be heading for Iraq. Photo: The Swedish Armed Forces

"The Swedish contribution will be fully concentrated on humanitarian support," said Fredrik Belfrage, who represented the Swedish government at a Friday meeting of the parliamentary committee on European affairs, to the TT news agency.

The EU's foreign ministers have meanwhile gathered in Brussels on Friday to discuss the escalating crisis.

Bildt expressed support for the military support carried out by the US and France, among others, but said that for 'legal reasons' Sweden was unable to do the same.

"We concentrate on what we can do best," he said.

The EU meanwhile is finding it difficult to unite behind calls from France, Italy and the UK to intervene militarily in Iraq.

There is broad support however for providing weapons to the Kurdish forces but, according to a Reuters report, Sweden was opposed as Swedish law prevents exporting weapons to a war-zone.

EU sets up a humanitarian air bridge to northern Iraq as part of our response to the grave challenge of the country. Sweden will take part.

Sweden's Nordic neighbours Norway have meanwhile confirmed that meetings have been held with Nato to discuss military and humanitarian support.

Prime Minister Erna Solberg confirmed in a televised multi-party political debate in Arendal, screened Thursday evening, the government had received a request from the US to help the crisis in Iraq.

Denmark's Prime Minister Helle Thorning-Schmidt said on Thursday evening that the government has secured the backing of parliament to offer military transport aircraft to the US mission.

Danish military personnel could also directly transport humanitarian aid to northern Iraq.
“The government has decided that we will tell the US and other like-minded countries that we are ready to contribute to the humanitarian support operation that the Americans are leading in northern Iraq,” Thorning-Schmidt told TV2.
German Chanellor Angela Merkel said the nation may reconsider its traditional ban on exporting weapons to conflict zones for this case, and France will also be sending support.
The militant jihadist group the Islamic State, previously known as ISIS, has made significant advances throughout Syria and northern Iraq in recent weeks. As many as 1.6 million people are reported to have fled the escalating violence, including up to 800,000 children.