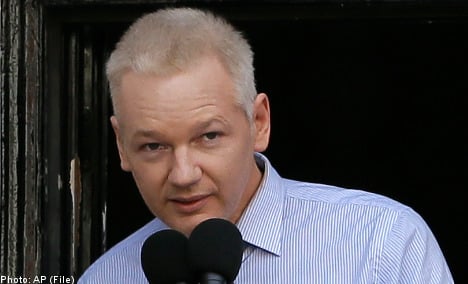 From the press conference

The Ecuadorian foreign minister began Monday's press conference on Monday by stating that Assange should be released.

"It's time to free Julian Assange, it's time for his human rights to be respected," he told reporters.

When the Australian WikiLeaks founder took to the microphone, he stressed that he still has not been charged over the rape allegations from Sweden.

"It has now been two years since I was granted political asylum in this embassy," he said.
"Through all that time, I have not been charged with an offence in England nor in Sweden."
He added that the women in Sweden have still never officially accused him of rape, rather that they had "explicitly denied it".
When the microphone was turned over to reporters, Assange was immediately probed about his health. The 43-year-old danced around the question, saying that he "would be leaving the embassy soon". He refused to comment further.
When accused of being "deliberately obscure" he elaborated on his health, but not what he meant by "leaving soon".
He said that in his life without sunlight, "at a cost of more than £6.5 million pounds", he is stuck in "an environment in which any healthy person would find themselves soon enough with certain difficulties".
As to how he plans to leave the embassy "soon", reporters and commentators have been left bamboozled. The press meet appeared to have raised more questions than it answered. Speculation about hand over to police

Following two years in the Ecuadorian embassy, British media reported that the Australian would hand himself over to police on Monday.

The Daily Mail newspaper, which sent a reporter to meet Assange, reported over the weekend that the WikiLeaks founder was suffering from a potentially life-threatening heart condition and "dangerously high blood pressure", as well as a "chronic lung complaint".
The fact that Assange has been inside for two years means he's lacking in Vitamin D, which means a risk of asthma, diabetes, and even dementia, the paper added.
Ecuador's foreign minister, Ricardo Patino, also voiced concerns about how officials were treating both Assange and his case.

Patino accused the British government of violating Assange's human rights, during an interview published by The Guardian newspaper on Sunday.

"We have made proposals, we have submitted documents, and all we have seen on the part of the British government is an increase in security to make sure Julian Assange does not leave the embassy, but there has been no political will or any steps taken towards a diplomatic solution to this," he told the paper.

"Everyone around the world knows that the rights of Julian Assange have been violated."

Assange has been in the embassy to avoid extradition to Sweden, where he is wanted for questioning over allegations of rape and sexual molestation – which Assange has denied.

The 43-year-old fears that being sent to Sweden would be a pretext for transferring him to the United States, where WikiLeaks sparked an uproar with its publication of thousands of secret documents.