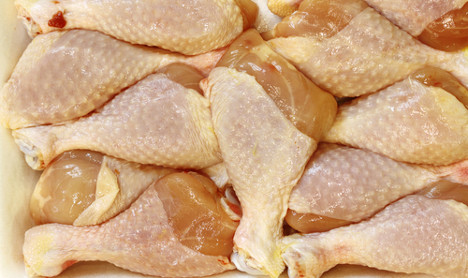 The chicken in this picture is not the smuggled chicken from the story. Photo: Shutterstock.
The smuggler was apprehended at the Norwegian border between Örge and Kongsvinger, reported the Dagens Nyheter newspaper on Monday.
Inside his Volvo car was 500 kilogrammes of raw, frozen chicken.
The Norwegian customs team wasn't particularly surprised by the Swede's haul, however, as he'd has been caught doing the exact same chicken run eight times before.
"He can count on getting a fine and we've confiscated the goods," head of customs Gro Lene Gundelsby told DN.
The Swede's attempted smuggle was 50 times larger than the legal amount allowed for individuals crossing the border – a paltry 10 kilogrammes of poultry.