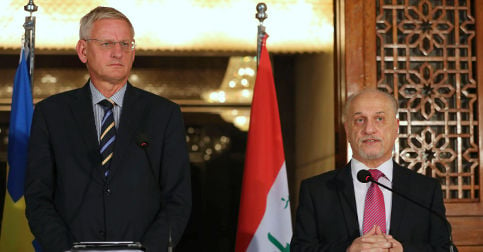 After visiting with Iraqi politicians on Monday, Foreign Minister Carl Bildt arrived in Erbil, in the Kurdistan region of Iraq, on Tuesday morning to meet with Kurdish Governor Nawzad Hadi and President Masoud Barzani.

Important meeting with KRG President Barzani on all the challenges. He was very grateful for our visit and support. pic.twitter.com/qI7imoF0eK

"We have huge support on the way from Sweden and the EU," Bildt told newspaper Dagens Nyheter.

"It's massive, but our efforts must increase and be persevering and long-term. We must also get a government set up in Baghdad which can fight back and recapture Mosul."

Sweden rejected US calls for military support in Iraq, but has offered humanitarian assistance instead. The government decided to use 50 billion kronor ($7.3 billion) for assisting in Iraq.

The first delivery of Swedish humanitarian aid is set to arrive to Iraq on Tuesday afternoon, as two Hercules planes equipped with tents and blankets departed Örebro at 2:30pm.

Bildt said that authorities in Sweden were already discussing ways to increase aid to Iraq.

"We also have discussions with UNHCR and others about building a number of refugee camps," Bildt said.

The minister also paid a visit to the Baharka refugee camp, where he sat and spoke with refugee families who had been forced to leave home.

"They have told me their stories, and it reminds me of the Yugoslav Wars," Bildt remarked. "It's really the same stories. Suddenly something happens, and people who were once neighbours suddenly turn against them and they flee, fearing for their lives."

Bildt was prime minister of Sweden during the first few years of the Yugoslavian conflict and served as a mediator during the Bosnian war after his term.

Between 1999 and 2001 he also was the UN Secretary General's Special Envoy for the Balkans. His work with Yugoslavia, however, has been the subject of international criticism.