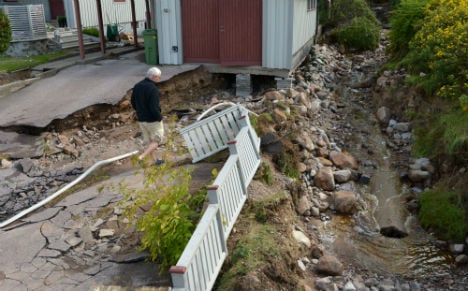 Photo: Johan Nilsson/TT
Parts of western, central and southern Sweden have all been hit by the flooding which has led to several roads being washed away. Now the SMHI weather agency has forecast more rain for western Sweden.
"There is a risk of rain showers in these areas together with some thunder. It's not major rain which is expected but with the lightning it can lead to more powerful showers," Lisa Frost of SMHI told the TT news agency.
On Friday the weather agency downgraded all the class two warnings to class one, but on Saturday morning it was raised to class two in Halland on the coastline between Varberg and Halmstad.
The fresh batch of rain is mainly expected to come down in the Halland region on Sweden's west coast. In other affected parts of the country the situation has started to stabilize with the home guard intervening in some of the worst hit areas.
IN PICTURES: New scenes from the floods Kristinehamn in Värmland was particularly hard hit, with stretches of the nearby E18 closed down and several smaller roads washed away. Emergency teams had to rescue a man who was stuck in a car and surrounded by metre-deep water.
It remains unclear as to when the road will reopen with more closures anticipated if conditions worsen. The local municipality has urged residents in the area to continue boiling their water as a precaution.
Local media in Värmland reported that a campsite in Karlstad had to close after more than 40 homes were flooded.
The situation in Getinge, the initial flood scene, has since stabilized with people who were told to leave their homes since able to return.
Sweden's Defence Minister Karin Enström said after visiting the scene in midweek that she was awestruck by the impact of a natural disaster.
"What you're struck by is the enormous power of the water," she told the TT news agency.
"When it rains like this and the water has nowhere to go then the effects are huge."
The home guard has been on hand to held build water barrier using sandbags, although many streets have already flooded, leaving dozens of cars underwater.