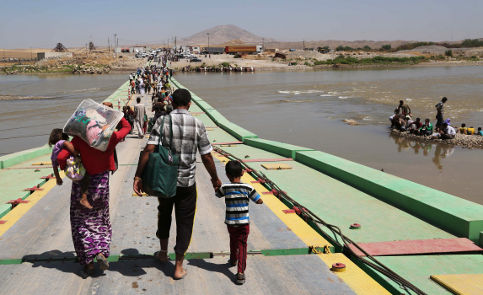 Refugees in Iraq. Photo: Khalid Mohammed/TT
In October, Sweden's Migration Board (Migrationsverket) is expected to raise the prognosis of refugees in Sweden to 100,000, reported the Sydsvenskan newspaper on Tuesday.
The total would mark an all-time record for Sweden.
A spokesperson from the board explained that the dramatic increase Sweden has seen of late could be put explained by the unrest around the world.
"And there's always an increase in the autumn. We think that will be the case this year too," Christer Zettergren told the paper.
If Sydsvenskan's prognosis is accurate, the 2014 total will eclipse the most intense period of the Yugoslav War in the 1990s.
The board took to Twitter on Tuesday morning, however, to say that the information in the paper was incorrect, and that July's prognosis still applied.
This year's income so far has arrived mostly from Syria, Somalia, Libya, and Eritrea.
Another reason for the hike in numbers is the worsening situation in northern Iraq.
"Our conclusion is that refugees from there still can't get to Sweden, but will be able to by late autumn," Zettergren concluded.
A poll published on Monday showed that more than a quarter of Swedes think Sweden should take in more refugees.
The poll, carried out by Novus, found that 32 percent of respondents believed the intake should be decreased, and 36 percent said the amount should remain the same. About 26 percent said Sweden should take in even more refugees, and six percent responded that they "didn't know".
"A clear majority (65%) think Sweden should take in just as many or as many as now," the survey concluded.
The poll also showed that women and younger Swedes were slightly more positive towards refugees than men and older Swedes.
On Saturday, Prime Minister Fredrik Reinfeldt said Swedes should "show tolerance" in the face of increasing refugee numbers.
"I know that this will cause friction. I therefore call on the Swedish people to show patience and open their hearts," he said.
Last year, Sweden took in almost 20 percent of the EU's asylum seekers, more than any other country in the union. Photo: TT
Despite Sweden's relatively small population of 9.5 million people, which is 1.9 percent of the European Union's total population, Sweden opened the doors to a total of 135,700 asylum seekers – 46 percent of whom came from Syria.
After Syrians, most of Sweden's asylum seekers in 2013 were stateless at a total of 4,110. The third biggest group was from Eritrea at 2,565.
In September last year, Sweden granted permanent residence to all Syrian refugees, the first country in the EU to do so.