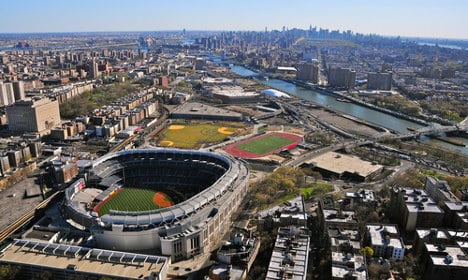 "A lot of Swedish kids wear Yankees caps, which is a baseball team from the Bronx. I bet they don't even know it was named after a Swede," former New York commissioner Brian G. Andersson told The Local.

All that is about to change, if Andersson gets his way. The New Yorker has collaborated with Swede Roy Gustafsson to celebrate a piece of real estate – but more than that, the Swedish roots behind it.

Indeed, the southern Swedish city of Sävsjö and its 11,000 inhabitants are about to hold what may be their biggest party ever. And it's all to celebrate a man named Jonas Bronck – the Swede who gave the famous New York Bronx borough its name.

Jonas Bronck, born in 1600 in Komstad, a small village outside of Sävsjö, didn't stick around in his hometown for too long. He became a sea captain in the Dutch merchant navy and sailed to New York in 1639, settling there with his Dutch wife.

New York wasn't quite so crowded at the time, and the Swedish sailor bought the lands which would be nicknamed after him and known forevermore as the Bronx.

And this weekend, his hometown is going to celebrate the 375th anniversary of that very purchase.

Roy Gustafsson, co-founder of the Jonas Bronck Center, moved to Sävsjö some years ago when he first heard of Bronck. He struggled for the first six months to get some kind of project off the ground, but faced resistance from the municipality.

The Sävsjö council found it unlikely that posh New Yorkers would have any interest in a small town in Småland and figured that Gustafsson's project was as doomed as the Dodgers in the 1977 World Series.

"You should be proud of your municipality and do something good and positive for the community," Gustafsson told The Local. "But in Småland people stay in their corner. It's a redneck area. Even now that the event is about to happen people have been positive, but still a bit hesitant." But luckily, Gustafsson finally got a home run. Someone all the way in New York was also looking into Jonas Bronck – and that someone was Brian G. Andersson.

Andersson had been researching Bronck for 30 years before he finally contacted Gustafsson, eager to touch base with someone else interested in a Bronck project.

"It was encouraging to find that someone else wanted to build a cultural connection," Andersson explained. "This is a big anniversary for Sweden, but it is also new for them."

Andersson, who is of Swedish origin, added that he hoped the event would promote a connection between New York and Sweden.

"We hope for a sister relationship between Jönköping and the Bronx. This could open up business and cultural opportunities."

The anniversary of Bronck's settlement will kick off on Friday, August 22nd, with a concert. There will be a variety of activities and exhibitions throughout the weekend, including cruising with American veteran cars and motorcycles by the religious MC gang, Holy Riders.

Descendants of Jonas Bronck visiting from the US will also attend the event, including a priest who will hold a service at the church of Bronck's christening.

"The locals of Sävsjö have been very positive about the event and the stores have been decorated with American flags," Gustafsson said. "I am proud because many unemployed people have been working on organizing the event for over a year."

In 2016 Andersson hopes to celebrate 400 years since the birth of Jonas Bronck. He will also be arriving this week in Sweden to attend the event.

"It is very fulfilling after so many years of work to attend the celebrations," he added.

For more information about Jonas Bronck and the schedule of the weekend's celebrations in Sävsjö, visit the official website here.