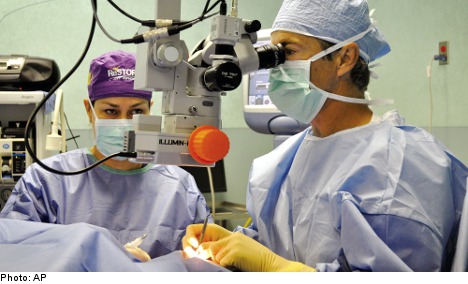 Hypospadias, a birth defect where the urethral opening is abnormally placed, is becoming a more common case among Sweden's new-born boys.
Researchers at Stockholm's Karolinksa Institute have published results from a 40-year study in which they collected data from all males born between 1973 and 2009.
They found that before 1990, cases of hypospadias were recorded in 4.5 boys out of every thousand. After 1990, the figure increased to 8 per 1,000 boys.
The study looked into factors that are known to cause the defect, such as low-birth weight, being born a twin, or parents who used in vitro fertilization (IVF) to conceive, but researchers stated that the increase did not correlate with these factors.
Researchers concluded that the increase could not be put down to previously known factors, but rather that an unknown factor was behind the deformations.
Speaking with the Dagens Medicin newspaper, Anna Skarin Nordenvall from the institute refused to rule out the possibility that environmental agents known as endocrine disruptors could be interfering with human hormonal systems, and therefore behind the increase in statistics.
Endocrine disruptors are chemicals that can disrupt the hormone system, and have been linked to cancer, birth defects, and brain development problems. They can be found in food, plastics, and various household products.

HEALTH
How much will I have to pay to go to the dentist in Sweden?
Url copied to clipboard!