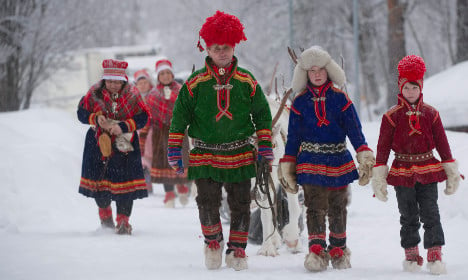 Sweden is one of the most multicultural countries in Europe with around 200 languages spoken, according to the Language Council.

But for a language to be inducted into the small group of official minority languages is no simple accomplishment, and only five languages in Sweden hold that honour.

And as widely spoken as English is, you may be surprised to learn that it's not one of them.

Finnish: There are between 500,000 and 1 million Sweden Finns in the country, mainly in Stockholm and the Mälaren Valley. Unlike Norwegian and Danish, Finnish comes from an entirely different language family to Swedish.

Meänkieli (Torne Valley Finish): Meänkieli is a close relative of the Finnish language, and is spoken by the Torne Vally Finns, the majority of whom live in the north of Sweden. There are around 50,000 up north and 5,000 in Stockholm.

Sami languages: Approximately 20,000 – 35,000 Samis speak different variations of the Sami language, and most live in northern Sweden. The language can be traced at least 2,000 years back in time.

Yiddish: Thousands of Jews arrived in Sweden in the 18th century, and now there are around 20,000 – 25,000 Jews living in Sweden, mainly in the larger cities. Their minority language is Yiddish.

Romani: There are 50,000-100,000 Roma living across Sweden. The different variations of Romani constitute the final minority language of Sweden. The language has been spoken in Sweden since the 16th century, although there was a centuries-long lapse when the Roma community was outlawed from Sweden, when many fled to Finland.

All five languages received their status when the parliament decided to join the framework convention for the protection of national minorities in Europe back in 1999.

To classify as a minority language, each must be classed as a language and not a dialect, and each must have been spoken in Sweden for at least three generations or approximately 100 years.

"Stockholm has a Finnish administrative board, meaning extended rights to preschool and elderly care in Finnish for the Sweden Finns," she tells The Local.

There are also administrative boards in another 26 municipalities in Sweden and 12 county councils.

More specifically, the policy provides protection and representation for the national minorities, strengthens their opportunities to influence policy, and supports their languages so that they are kept alive.

The County Administrative Board in Stockholm and the Sami Parliament have been primarily responsible for coordinating and ensuring that the Swedish minority policy is being implemented in the country.

But according to Skoglund, even if the law has helped in strengthening the minority cultures, it hasn't been easy.

"There are difficulties spreading knowledge about the minority law and the responsibility from the authorities. The law is too vague when it comes to providing the right guidance about the issues," she adds.

"It needs to be clarified and information needs to be spread out more, because people have little knowledge about the national minorities."

Christian Mattsson, project leader at the Institute for Language and Folklore, says efforts are being made to prevent the languages from disappearing.

"We provide a grant of 3.5 million kronor ($509,000) for projects to revitalize all five languages. Our main focus is primarily the languages, even if the cultural heritage is said to be supported by it," he explains.

Mattsson says that the institute is also working on Romani and Meänkieli dictionaries to help preserve and strengthen the languages. Yiddish has been more limited, and he adds that they will be working this autumn with a Yiddish language purist.

Even the Swedish sign language has been considered as a minority language, but did not fulfill the criteria according to the European convention board.

"For it to be a national minority language, a political majority is needed. However, Swedish sign language is in practice treated equally as a minority language and its status does not affect our work," Mattsson explains.

"The European convention board for the protection of national minorities sets a requirement that the language has to have been 'traditionally' spoken in the country," says Mattsson.

"This means that like Arabic, for example, which arrived in Sweden mainly through immigration during the twentieth century and beyond, are not recognized as national minorities."

Swedish, meanwhile, remains the country's "main language" – but has only had the official honour since new laws were passed in 2009.