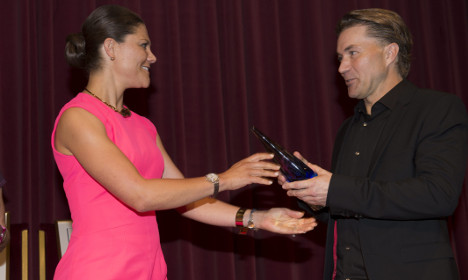 Lorentzon attended the event at Stockholm's Grand Hotel and received the award from Crown Princess Victoria.

"I'm bad at most things, but I'm good at two things. I am good at looking into the crystal ball and predicting trends, and then I'm good at finding the right people," said Lorentzon referring to his colleague Daniel Ek.

The Society for Expatriate Swedes (Föreningen svenskar i världen), which first handed out the award in 1988, said the Swedes earned the award for their contribution to the music world.

"Through their ingenuity and entrepreneurial skills, they've made it possible for people from all over the world to have access to almost all of the world's music," the society said in a statement.

It also noted that the headquarters in Stockholm employed people from 25 countries around the world – a fact that "says a great deal about how global the music service really is".

Founded in 2006, Spotify offers free streaming for 40 million users worldwide, 10 million of whom are paying customers. The company plans to expand into Russian and South-East Asia.